Skip to content
HomeArticlesInformation about “Silver Amalgam” Fillings, Our Protocol for Removing Them, and Basics Regarding Their Replacement
This website contains over 100 articles that Dr. McBride has written during the continual evolution of the Dental Wellness Center. This article, The Essence of The Dental Wellness Center, will describe the distinctness of the practice, its philosophy and its offerings that make it truly unique! It would benefit the reader to read this article first which is an all-encompassing approach to the Dental Wellness Center.  >> Click Here <<   to Read THE ESSENCE OF THE DENTAL WELLNESS CENTER before continuing to browse other articles. Enjoy!

Information about “Silver Amalgam” Fillings, Our Protocol for Removing Them, and Basics Regarding Their Replacement

The Dental Wellness Center became “mercury free” by discontinuing the use of mercury amalgam fillings well over 20 years ago. The original rationale for ending their usage was that most all teeth filled with this substance would eventually fracture due to the expansion of the metal, sometimes “mortally” (down the middle) and need to be extracted, or require root canal treatment, gum surgery or both afterwards to restore the tooth properly. Also, other materials were coming on the market that were approaching the longevity and positive attrition (wear) qualities of these fillings. Another thing, which was not even addressed in dental school, was the fact that mercury vapor released during their placement could be unhealthy not only for the patient but also for the doctor and assistant. It was also becoming quite evident from research that mercury vapor continues to be released after the amalgam filling material becomes hardened within teeth. Realizing these facts, we have become “mercury safe,” which means that we not only don’t place mercury amalgam fillings, but implement safety features that protect our patients as well as ourselves. The only mercury in our office today resides within the fillings of patients who may have them. The following is some information about the metal element mercury, fillings that have mercury amalgamated within them, how we handle their removal and the rationale for their replacement.

Protocol for a patient desiring to have their mercury amalgam fillings removed/replaced:

Now, for something very important: What material is best for their replacement? This is a very significant question and more encompassing than one might think. The materials used can be influenced by several factors, such as the case of those used in manufacturing an airplane which needs to have proper form, structure and function for successful, safe flights. The following information will assist you in understanding why this is so important.

We see new patients daily who have varied concerns that prompt them to enter the Dental Wellness Center family of patients, e.g., routine check-up, gum and decay problems, TMJ, head and neck pain, cosmetic concerns, teeth replacements – bridges, partials, root replacement implants, etc. as well as mercury amalgam filling removals. All who enroll begin a process that includes an initial interview with the doctor, a clinical oral examination and a complete series of radiographs. During the clinical examination, various oral health/disease parameters are investigated such as:

Type of filling material used is just one aspect of looking at The Bigger Picture. For instance, if a person’s bite alignment is off and it is causing teeth to have abnormal wear, head and/or neck pain or loose teeth, the alignment would need to be addressed first, as placing any type of restorative material to comply with a bite that is off would not only perpetuate the underlying problem, but could also worsen it. Just like placing new tires on an automobile whose front end is out of alignment.

After bite alignment procedures, if needed, an appropriate material would be recommended to give the teeth repaired the best chance of never needing repair again. This is important because each time a tooth is repaired, the nerve within it is traumatized and these traumas, like x-rays, are cumulative. Following is a typical history of incidents that occur during the lifetime of a tooth. First the tooth has a cavity (decay) which traumatizes the nerve (pulp) as bacteria enter it even with a moderate sized decay. Then the decay is drilled out along with some healthy tooth structure to provide undercuts so that the filling won’t fall out, as mercury amalgam fillings have absolutely no adhesive qualities – they actually just sit in the tooth. And then they expand and contract at a different rate than the tooth, which cracks from internal expansion that eventually causes tooth structure to break away as seen with this tooth.

Fortunately, the pulp issue inside the tooth has healing resources – a blood supply and a lymphatic system – that counteract the inflammatory process from the bacterial invasions (decays) and trauma of the removal process. The plot thickens though, as the process continues with the tooth breaking from being weakened from a previous filling(s) and/or has another decay and needs repairing again – more trauma to the pulp. Small decays to be filled or mercury amalgam fillings to be replaced can be restored with direct bonded tooth-colored restorations in one appointment. However, when a large amount of tooth structure is missing from decay or the presence of large mercury amalgam fillings, especially in back teeth where the pressure is greatest, this type of filling material has less of a longevity factor as its strength factor is limited compared to laboratory processed materials. Also, if the bonding material replaces a large biting area of a back tooth where the opposing tooth contacts only the material and not much surrounding biting tooth surface, it can wear away from chewing forces causing a bite to change through the opposing tooth’s erupting into the void created by the wear. One feature of mercury amalgam fillings is that they wear similarly to that of tooth structure. I’ve seen them replaced with bonding materials and although the mercury was now absent, the materials that replaced it presented other types of problems such as teeth sensitivity, bite shifting, etc. A tooth with large and/or multiple fillings will eventually need a protective restoration of some type, and this adds more trauma to the pulp. Here is where the philosophy of the dental practice enters, which can vary considerably from dentist to dentist. The type of protective restoration most frequently placed is a porcelain crown. Yet, the most frequently root canalled teeth are those with porcelain crowns. This is because, along with the accumulated traumas earlier described, a porcelain crown requires that 35 – 40% additional healthy tooth structure be removed circumferentially as well from top down to make room for the porcelain and underlying metal or zirconium materials fabricated within it that give it strength. This causes a lot of pulp/nerve trauma, as the surface of the tooth at its neck area just above the gum needs to be cut into deep enough around its base to provide strength of material. This area – 360 degrees around the base of the tooth – is especially close to its nerve.

Back teeth can generate more than 500 pounds per square inch biting pressure, so the ideal material would be one that is strong enough to withstand these forces without being very thick in the interest of tooth structure conservation, and this is – hands down – gold. Any good dentist will tell you that well-placed conservative cast gold restorations are the best of the lot, bar none, in that they are kindest to teeth from several perspectives:

Many people “don’t want gold,” especially here in California compared for example to people in the Pacific Northwest where they don’t seem to be as concerned with the gold color. It is interesting to note that in those areas there aren’t as many root canal dentist specialists per general dentist as there are in California.

The dilemma that I face when recommending these restorations (which I have had placed in my own teeth) has to do with the intent residing within the oath I signed upon becoming a dentist which states, “First, Do No Harm…” in juxtaposition to the patient’s desire to have natural tooth color, which is understandable. I know that when I drill off a lot of tooth structure I may be inviting a root canal treatment which could occur around treatment time, or delayed, maybe for years. And a root canal treatment on a back tooth is not a guarantee of its safety for the future. I have seen many back teeth fracture underneath the best of crowns requiring the tooth’s removal. Now we’re looking at an extraction, root replacement implant and new crown.

Some of the new porcelain materials are stronger, look great and fit better than those of the past, however they haven’t as yet compiled the track record of gold which has been used for over 100 years. However, in most cases, mercury amalgam fillings can be replaced with conservative cast gold restorations in a very inconspicuous manner.

I believe that it is very important to consider all parameters involved when making decisions concerning the health and longevity of one’s oral system, not only regarding safety in removing mercury amalgam fillings, but the type of materials used in replacing them, the quality of the dental laboratory, and the individuality of the patient. I want to honor my patient’s desires; however I also want their decisions to be influenced by facts that will allow them to make a properly informed one prior to even taking the first step.

“I trusted Dr. McBride’s judgment from the beginning in his dental recommendations. I had a lot of cavities as a teenager and young adult, and first of all he taught me how to stop getting them. Then he restored my teeth with conservative cast gold restorations which he said would be least traumatic to the teeth nerves and the most long lasting treatment available if done properly.

I guess they were in that they have kept my teeth strong and healthy for over 30 years and I have had no cavities, re-treatment of his work or root canals on any of my teeth since I started with him. I love my smile – you can’t see any of the gold – but what’s more, they will probably last a lifetime. Treatment that’s done right the first time pays off year after year and is one of the best investments I’ve ever made in my health. Thank you Dr. McBride.” 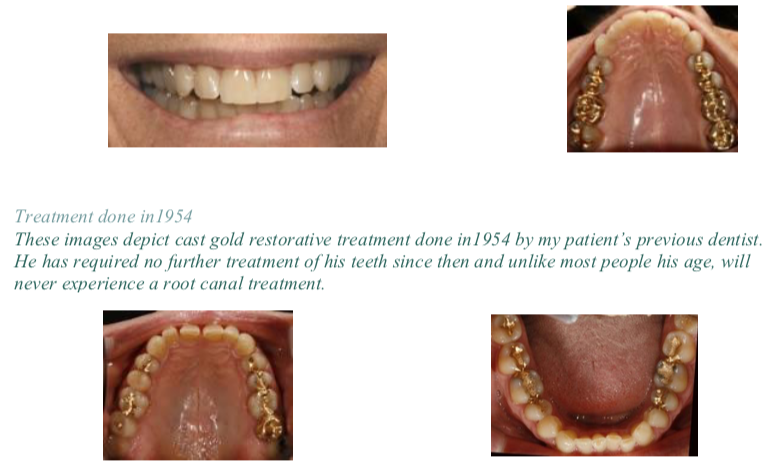 Welcome to the Dental Wellness Center
Gifts
Dental Tourism - A Philosophical Trip South of the Border
Metabolic Syndrome
A Word About Dental Laboratory Technology
Oral Piercings – New Studies – and Tragedies
Quality and Safety
Tooth Decay on the Rise
What About Root Canals?
What’s New at The Dental Wellness Center?
Why is There Such a Variance in Dental Fees?