Skip to content
HomeArticlesOral Piercings – New Studies – and Tragedies
This website contains over 100 articles that Dr. McBride has written during the continual evolution of the Dental Wellness Center. This article, The Essence of The Dental Wellness Center, will describe the distinctness of the practice, its philosophy and its offerings that make it truly unique! It would benefit the reader to read this article first which is an all-encompassing approach to the Dental Wellness Center.  >> Click Here <<   to Read THE ESSENCE OF THE DENTAL WELLNESS CENTER before continuing to browse other articles. Enjoy!

New evidence lends further support to the need for dentists to caution patients about the dangers of tongue piercing, which can lead to severe infections, chipped and fractured teeth, gingival recession, and even death.

The most recent fatality occurred in April of this year when a U.K. woman died of blood poisoning and pneumonia just 48 hours after having a steel bar put through her tongue. Last year, a young Israeli man developed multiple abscesses in his brain after getting his tongue pierced. He died two months later from severe septic shock and organ failure. And in 2007, a young Boston woman succumbed to viral meningitis in 2007 about a month after she got an infection from a tongue piercing. 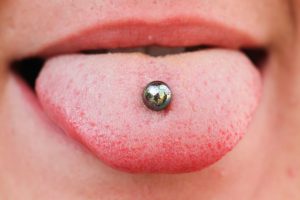 The American Dental Association’s position is clear: Oral piercings, which involve the tongue (the most common site), lips, cheeks, uvula, or a combination of sites, have been implicated in a number of adverse oral and systemic conditions. … Because of its potential for numerous negative sequelae, the American Dental Association opposes the practice of intraoral/perioral (around the mouth) piercing and tongue splitting.

Now two recent studies point to additional risks. The University of Buffalo (UB) has done studies regarding the deleterious effects of tongue piercing, including one which found that high school students who had barbell implants or studs produced a damaging habit of pushing the metal stud up against and between their upper incisors. Repeated “playing” with the stud eventually caused a gap between the upper front teeth.

Gingival recession is of particular interest, the researchers noted, because it can increase susceptibility to hypersensitive dentine and root caries, especially as regards negative aesthetic effects (American Journal of Orthodontics and Dentofacial Orthopedics, November 2008, Vol. 134:5, pp. 652-656).

Welcome to the Dental Wellness Center
Gifts
Dental Tourism - A Philosophical Trip South of the Border
Metabolic Syndrome
A Word About Dental Laboratory Technology
Oral Piercings – New Studies – and Tragedies
Quality and Safety
Tooth Decay on the Rise
What About Root Canals?
What’s New at The Dental Wellness Center?
Why is There Such a Variance in Dental Fees?